Gotta love the Uchiha clan. Kakashi has always been another favorite character of mine from the series and I was very excited when the Kakashi Gaiden was published. I love hearing the backstories to the characters. I had known about Obito from earlier chapters, but when I finally got to actually see him...I just needed to cosplay him. And my friends were cosplaying the rest of the team, Kakashi and Rin.

Obito was kind of a rushed costume and the truth is I made most of the outfit at the convention which happened to be Katsucon 2005. I'm a horrible procrastinator. I pretty much free-drafted most of the costume and was able to finish it up in 2 evenings, and just in time for the Naruto photoshoot. I went with the colors from the artbook, the orange and blue. The anime has Obito colored in an olive green and black and the blue and orange just seemed so much more fitting. Plus, I had the fabric around from making Naruto.

A few accessories were made before the convention. Namely, items that had to be dyed, such as the elastic for the googles/headphones, and the webbed belt and buckle. These items were dyed using RIT dye. The goggles themselves were a pair of child-sized ski goggles. The earphones were made from lids of oval shaped gift box lids that were spray painted silver and a circle cut in the middle with a black fabric covering. Wrist bracers were made from a matching cotton knit fabric and spray painted styrene sheeting plastic was used for the metal protection plates and were attached to the fabric with silver paper brads.

Pretty much everything else on the outfit was re-used from my Sasuke and Naruto cosplays. The leg wraps, holsters, kunai, and shuriken, ninja sandals, and leaf head protector, all were made previously.

Sharingan contacts were ordered from 9mmsfx. They are the "Sasuke" version.

I must say, that I was quite amused when I wore this outfit in 2005. Obito was still rather a new character and hadn't really been seen in the anime yet, so most people kept asking me what version of Sasuke I was cosplaying, since all the Uchihas wear the clan symbol on the back of their outfits. 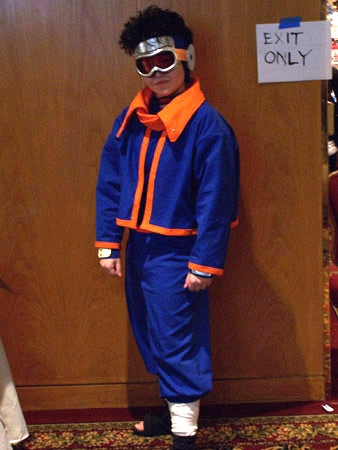