I had heard of Rozen Maiden and so I decided to watch the show and I fell in love. At first, I was considering cosplaying Suigintou, but Yesod who saw the series really like Souseiseki and asked if I would do Suiseiseki instead. And so I happily agreed, because she really is an adorably crazy character. We first wore these outfits at Ohayocon 2008. And it has been one of the most worn and most fun cosplays to wear. Except when people follow me around and constantly say "desu, desu, desu."

The basic design of the outfit was based around pattern Simplicity 4900 which was a Civil War era dress pattern with a very full skirt. I really only ended up using the measurements of the pattern for the skirt itself. Had to draft the vest, sleeves, and undersleeves. The vest was drafted because we had to do it for both Yesod's Boku and my Desu outfits. The collars were also drafted and made twice, one for each of us. The base fabric for the outfits were Casa satin, with white shirt cotton for the undershirts. We found a lovely brocade for the black vests and detailing. My outfit also required making a ton of bias tape and ruffles from the black brocade for the detailing on Suiseiseki. What made it hard was the fact that the brocade fabric just frayed so badly and the room we made our outfits in was covered in black threads.

The head scarf was created from a strip of cotton in a beige color embroidered with a scallop edging. I love satin stitches. I got hold of a hoop skirt and petticoat to give the skirt some fullness, and made some pantaloons because I did find some clips of Suiseiseki's skirt lifting up. The wig was a long wig that I had rolled around some tubes and heated and sprayed into ringlets, but unfortunately, I think the humidity killed them so they will need to be restyled. Yesod and I also split 2 pairs of contacts, one green and one red to finish off the cosplays. 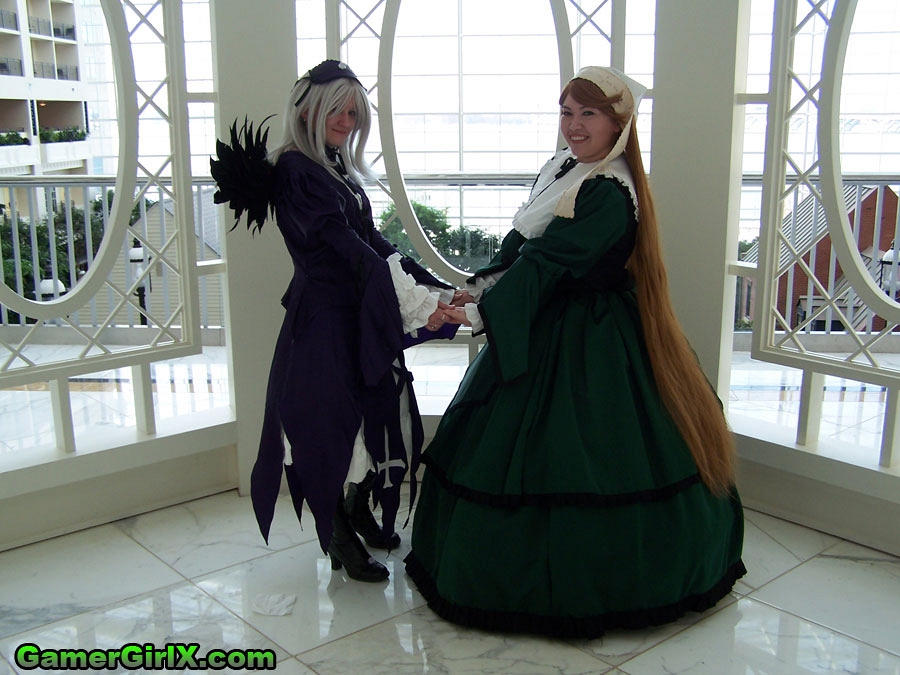